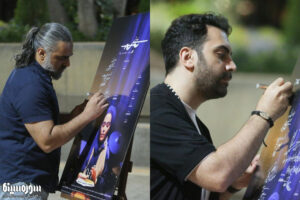 The private screening of the movie “Silent Pond” directed by Bahadur Zamani was held in compliance with health protocols and with the presence of actors, film crews and a group of artists at Niavaran Cultural Center.

According to Soura Cinema, citing the public relations of the project, the private screening ceremony of the movie “Silent Pond” directed by Bahadur Zamani and produced by Mohammad Reza Najadian was held on the evening of Friday, August 15th at Farhangsarai Niavaran.

At the beginning of the ceremony, the producer talked about the social harms that have afflicted the artistic community and said: “Nowadays, films with social concerns are made less and the empty space of these works is felt among our productions.”

Once, after appreciating the actors of the film for accompanying and cooperating with the group during the days of Corona, he presented this film to the world of music and said: This film is worrying and has dealt with various problems and issues in the field of music, issues that especially the younger people of this They struggle with it.

When we saw him in the role of Hazrat Abbas in the movie “Doomsday Day”, before that, he directed the feature documentary film Mirghasem, produced by Homan Kabiri, and he also wrote and directed several short films in his career. Barkeh Kashmish is his first independent film work, which was filmed last year in silence.

Berkah Kashim has been produced in more than 30 locations and with about a hundred actors. Also, in this film, which deals with the problems of the music field and the problems of many activists in this field, different groups and singers are used. It can be said that the coloring of the plans and the type of lighting used in the silent pond due to the theme and space are the highlights of this work.

The actors of this film are often chosen from theater figures and young actors, many of whom are introduced to the field of cinema with this film. Farzaneh Karimianfar, Yavor Ahmadifar, Amir Zhamzhani, etc. are some of the actors who appear in this movie.

In the summary of the story of “Silent Pond” it is stated: The film tells about the hardships of the life of a young girl who is very interested in music. When he enters the world of music, his life undergoes unexpected events…